There's simply no doubt in my mind whatsoever that you are all desperate for more posts about Cyril Ring - the actor whose name is instantly recalled whenever folks gather to discuss the character of Harvey Yates in The Cocoanuts. (See here and here.)
So here's the latest from my fellow Cyril obsessive, Mary O'Benar:

Per yours and Lolita's postulations that Cyril soldiered on because he cared deeply about his craft, I've found one item which may support that: in 1921, Cyril's among a handful of younger actors who create an after-hours review to entertain the theatrical community. Seems to be a rather innovative project, and it's under the aegis of several heavy-hitting guilds/clubs; Lambs, Friars.
That puts Cyril in the big leagues, and functioning with respect and support. If so, then to stick to acting decades after hitting bottom becomes quite tragic.
Cyril's face-time from all those films can't add up to more than 3 hours altogether, maybe less. From this distance, it does seem terribly futile as the work of a lifetime, but, in the end, impossible to know how Cyril saw it.
Cyril's last film part was in 1951, and that's the same year he came into a good inheritance. I did find that he was manager of a very good Hollywood restaurant in the late 1950s - huge bar, established regular hangout for famous movie folk - but I've no idea if he'd been doing that when still working in movies.
If it turns out he was the archetypal 'waiter between acting jobs' for 30 years, that truly would be tragic!
Posted by Matthew Coniam 2 comments:

(Thanks to Anthony Blampied for the tip-off.).
Strange things are afoot at the Internet Movie Database. .Under the postings for Harpo, all references to his "gookie" face have become "*bleep*ie". I'm not joking.
The reason is that 'Gook', if you're American (what do you mean, you're not?), is a well-known racial slur, applying to foreigners generally, Korean or Vietnamese ones especially. Just as 'Gookie' is a facial expression named after a New York cigar roller.
.Okay, the censorship is automatic - but the user comments are not.
One says: "I guess some would call this excessive Political Correctness, but I wouldn't trade it for what people had to put up with in the Good Old Days."
The woman whose original post was censored has obligingly changed it from 'the infamous Gookie face' to 'the infamous Harpo face' - and apologised for offending anyone.
Britishers note, then, that the IMDB's own description of Harpo as possessed of "big, poofy, curly red hair" has managed to escape from the offenceometer unscathed.
Posted by Matthew Coniam 6 comments:

Thanks to Damian for these fascinating newspaper ads for the first run of Animal Crackers at Loew's, the Home of Hits.
Oh, to have been alive and breathing that 1930 air!
Last week: Helen Kane in Heads Up; this week: the Marxes and Lillian Roth in Animal Crackers; next week: Roth again in DeMille's Madam Satan ("a marvelous picture"). All that plus an added Krazy Kat cartoon!
. 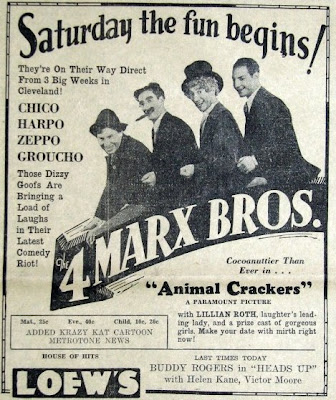 Saturday the fun begins! Those dizzy goofs on their way direct from three big weeks in Cleveland, Cocoanuttier than ever! A nice photograph of all four boys, and note the billing: Chico, Harpo, Zeppo, Groucho. It's not alphabetical, it's not left-to-right, it's just plain strange... 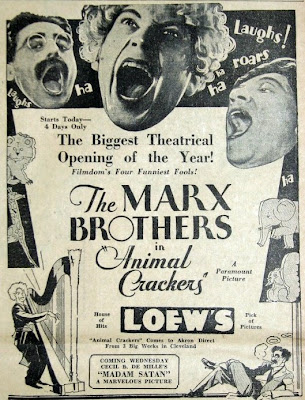 Starts today! Filmdom's four funniest fools in the biggest theatrical opening of the year! Four fools they may be, but only three make it to the poster this time, and only Groucho and Harpo are deemed worth caricaturing, along with a misleading selection of jungle beasts. 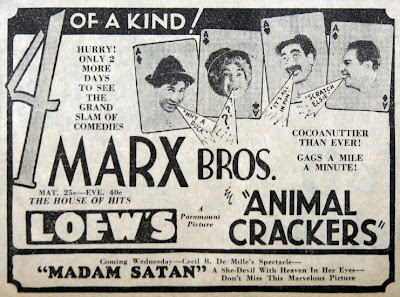 Only two more days to see the grand slam of comedies! Gags a mile a minute! And Zeppo's back! Harpo is speechless, Groucho is telling us that "it's all in pun", and Zeppo is saying "Scratch Elsie." Intriguingly, this refers to a snatch of dialogue in the 'dictating a letter' scene cut from all known prints of the film:

Groucho: Dear Elsie... no, never mind Elsie.
Zeppo: Do you want me to scratch Elsie?
Groucho: Well, if you enjoy that sort of thing, it's quite alright with me. However, I'm not interested in your private affairs, Jamison.

Odd that they couldn't have come up with an equally relevant quote for Chico, who's still saying "why a duck?" like The Cocoanuts never ended.

Posted by Matthew Coniam No comments:

What did you do, Cyril?

Further to my post here about Marx mystery man Cyril Ring (sneaky Harvey Yates in Cocoanuts), I've received a fascinating communiqué from Mary O'Benar, who lives in Florida and has been pondering the Ring Enigma for some time.
Extracts from her letter follow...
.
I've been looking for Cyril Ring for several years and still haven't got much more info than you do. I did run into one other person online, expert on Julian Eltinge, a friend of his sisters, and we agreed, speculatively, that there's got to be a scandal involved with Cyril. But neither of us can find it.
He doesn't just fail to build a thriving career. It's not a decline but sudden, in late 1921, something happened and boom! he's a non-person. Charlotte Greenwood not only divorces him in '22, but she seriously expunges him from her life.
I think he was well-accepted, comfortable in his sisters' Long Island high-end showbiz social world, but he just vanishes from NY, thereafter works about once a year in his brother-in-law's films but no others. After 7 years of that, then comes Cocoanuts. Then the one bit with WC Fields [The Barber Shop (1933); CR has speaking role as the bandit Fields accidentally apprehends - MC], then bit parts forever.
Cocoanuts was filmed on Long Island while the Marxes were also working Broadway. Half dozen people involved were close friends of his brother-in-law Thomas Meighan. Many of the films Cyril did have friendship/family connections, so that's pretty obviously how he continued after 'the scandal'.
What possibly could have been so scandalous to Broadway people in 1921 that we can't find a word on it? Those were some incredibly amoral times. The press had more mercy then, but his immediate family included 3 big stars, so what was so taboo that it would have been unpublishable and thoroughly buried, but tolerable enough that friends and family kept him in work, at least minimally, the rest of his life?
I've been researching Meighan's family and social circles for quite awhile now, all by internet due to 'enjoying poor health', the Cyril mystery really bugs me. I keep thinking if I were in New York and could get into archives of whatever papers were the nastiest then, surely something would surface. But instead, I've just been gathering his films, he's on TV a lot. I just counted up and I've passed 100 Cyril movies, TIVO, Netflix, etc-- gotten so I can pick him out in a crowd scene by instinct! He's not at all a poor actor, actually he usually blends in pretty skillfully. I don't think his decline was from a lack of talent...
Whether he was a bastard or an unsung hero, he certainly was a patient man.
.
If by any chance anyone out there has any more information on shadowy Cyril, Mary and I would be overjoyed to hear it...
In the meantime, The Marx Brothers Council of Britain is delighted to award Mary its Heroic Achievement Award for deliberately amassing a collection of over 100 Cyril Ring movies.
Posted by Matthew Coniam 14 comments: