Remember the good name of Phelps 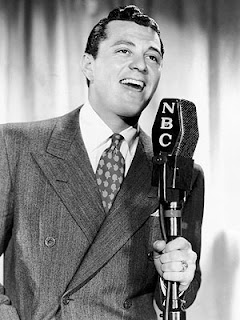 .
So at last, Grover has got what he wanted.
Tommy Rogers is no more.

What this means for the future of the Phelps department store is uncertain, but I do know what it means for the list of surviving Marx Brothers male leads.
Tony Martin was the last one.

Martin had a bigger career outside of the Marxiverse than most of them, and a longer lasting one too. This is reflected by his sharing above the title billing with them.
Unfortunately, though, he doesn't make much of an impression in The Big Store, and for many fans is among the least cherishable of all the smoothie support turns.
Even more unfortunately, I've just used the word 'Marxiverse'.
I'm very sorry and I'll try not to any more.

The chief bone of contention is the 'Tenement Symphony'.
Most of you, if you are to be believed, hate it with grand operatic fervour. But I've spoken to enough fans on the sly to know that it has a certain underground following.
It's certainly got its share of lyrical bathos, and some rhymes so contrived they make your brain sting. (The opening couplet about Schubert and Gershwin rivals Groucho's own "and this birdie goes with Verdi").
But personally, I can't help liking it and Martin both.
I like the way Tommy is Chico's mate, and that he warms to Flywheel from the first time they meet (leading to that weird sequence where they come close to sexually flirting with each other). I love the way the shop has got that machine that enables him to make a unique recording of his song If It's You for that dear old lady. ("If it's you, then I'll rush across the floor.")
And in the Symphony, I just love the bit where Chico and Harpo come in.

My friend Richard had a lovely idea once. Like the way At the Circus ends with that splendid shot of the orchestra drifting out to sea, The Big Store should close by cutting to the old lady that bought Tommy's record, whom we have not seen or thought about since, putting it on the gramophone in her parlour, only to find it is unplayable. The music sounds tinny and distant, it slurs, and all is distorted by crackle and ambient noise. Then either she should pluck it from the machine and smash it in disgust (cue jolly fade out music) or perhaps the camera should simply close in on the gramophone, and The End should be superimposed over the shot, still to the accompaniment of the record making this godawful noise.

Harpo's rather sweet appearance in The Story of Mankind lends further weight to the suggestion that his 'blonde wig' may have been light red, as opposed to the preferred red wig he wore on stage (seen looking almost black in The Cocoanuts and photos of the Day at the Races stage try-outs).
Or is he just taking advantage of colour film to get the old red one out of the box again and it's photographed a bit lighter in colour than it looks in black and white? If you turn down the colour on this clip, it could pass for the 'blonde' wig, familiar from the majority of the movies.
Or it could be a third wig, did you think of that?
On the other hand, the almost glowingly blonde one he seems to be wearing in fifties TV appearances (and A Night In Casablanca, but we can save that argument for another day) really is blonde, isn't it?
So that's four wigs. Do I hear five?
Posted by Matthew Coniam 16 comments: