As drunk by Chico 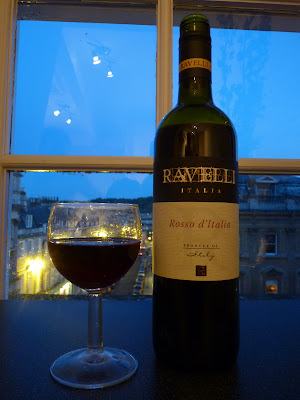 Email ThisBlogThis!Share to TwitterShare to FacebookShare to Pinterest
Labels: CHICO, Wine that has the same name as a Chico character

I found this picture by doing a Google search for 'sexy Groucho'.
Why I was doing a Google search for 'sexy Groucho' is another story and a very unpleasant one, but I think it's fair to say this photo more or less lives up to its promise, despite the presence of that open tin of paint and industrial yellow mop and bucket behind her.
If you are the sexy Groucho in question, why not drop us a line here at the council to let us know why you decided to have yourself photographed as a sexy Groucho in what looks like a disused kitchen, and whether it is something you do regularly or just that once.
And if any of you know of an even sexier Groucho, by all means send me the photos to prove it. (I've added 'Sexy Grouchos' as a label so I'm relying on you all now.)

Yes, it's party season, that's the point, and doubtless you'll all be digging out the Groucho costume, heading off to the office party, and wondering why nobody wants to dance with you. (Unless you're our sexy Groucho here, who was doubtless danced off her feet all night, with and without that wheelie-bucket.)
But as our sexy Groucho ably demonstrates, it's vital to get the look exactly right. There's nothing worse that dressing up as Groucho and having people just assume you're Professor Robert Winston.

So here are some tips, courtesy of ehow.com ("Discover the expert in you").
First, how to have a Groucho moustache.
"Groucho Marx is one of the most recognizable stars from Hollywood's early days," the preamble informs us, "thanks in part to his exaggerated mustache and eyebrows".
Of course you can save time by buying a glasses-nose-moustache combo ready made, and save yourself having to deal with all that messy greasepaint. This link will get you to the relevant page of the 'Just for Fun' online party supplies website, and to a charming photograph of what Groucho might have looked like in the nineteen-seventies if he'd retained his hair, and started smoking carrots.
Meanwhile, back at ehow.com ("Discover the expert in you"), here's how to be really serious and get yourself the whole costume. Full marks to whoever wrote this one for remembering Gummo, but points withdrawn for offering me no assistance whatsoever on how to create a Gummo costume.
A Groucho swing dance move is apparently a real move in swing dancing (hence the name) that is inspired by the famous loose-limbed Groucho dance, but not, obviously, a mere imitation of it. Imagine how silly that would look. The link above will show you how to do both a forward and a reverse one, which is like a forward one, only backwards. Bizarrely, it tells us that "the move may actually be referred to by a different name depending on the person to whom you're speaking".

And while we're on the subject of fake moustaches and their purpose and application in theory and practice for fun and profit, Damian, one of our most esteemed and longest-serving council members has forwarded me the following anecdote and photographic evidence. Make of it what you will...

I was in Berlin at the weekend and went to visit the Film and Television Museum. While passing through the Dietrich archive I came across a picture of her and good old Groucho which made me do a double take. It wasn't the photo itself but the fact that Groucho's 'tache and eyebrows looked like they had been retouched by hand. I don't know if he wasn't wearing his grease paint smear on that day and then the studio put it in afterwards, or if it needed 'thickening' - either way someone got nifty with a .001 paintbrush.
Photography wasn't allowed and I had already been approached twice for taking shots so I couldn't take a snap of the actual photo; I have tracked down a copy on the net and attached it, and even in this version it looks a few shades darker than anything else in the shot! 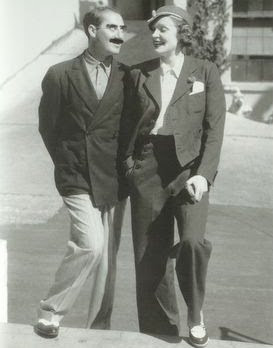 (That's Groucho on the left.)
Posted by Matthew Coniam 5 comments:

Avert innocent eyes: a delicate enquiry about Groucho and pornography 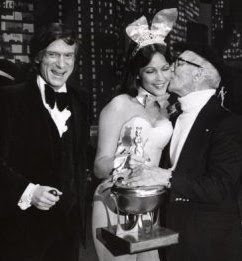 I sense an unresolved tension in Groucho during his latter years.
Like many another comedian before him - Bertrand Russell, for example - I'm sure he was intoxicated by the adoration of the young and trendy college generation that hailed him as a counterculture hero, bestowing upon him the kind of cred so rarely accorded those of such advanced years.
The urge to return the favour, and assume their attitudes and opinions, must have seemed not merely mannerly but virtually an obligation, not least because his continued golden boy status might easily rest upon his continuing to live up - or down - to their preferred image of him.
Obviously, the crusty conservatism of a Bob Hope was out of the question, and in later interviews, Groucho obligingly toes the line in many areas, especially regarding Nixon and the war in Vietnam. He was a regular visitor to the Playboy mansion, too, and a notable subject of the Playboy Interview; he seems to have genuinely liked Hugh Hefner. 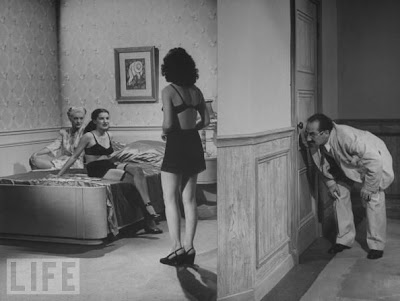 Then, of course, there is the notorious Marx Brothers Scrapbook, in which author Richard Anobile published, without Groucho's sanction and to his great subsequent chagrin, unedited transcripts of what he had assumed were off-the-record digressions into his sexual history and fantasies, relayed in the kind of censorable language he might well have assumed would never in a million years make it into print. If so, he misread the age.
Hilarious as much of it is (he explains how he "wanted to fuck" Thelma Todd and Marilyn Monroe, the latter of whom "wore this dress with bare tits") you strongly get the impression that this is not the voice of the real off-duty Groucho, but rather that of an old man attempting, a little desperately, to impress a young author with his modern attitudes.

So what does everyone else think? Have you heard this story anywhere else, or anything comparable? Does it ring true to you? 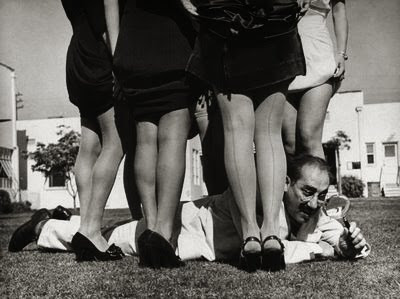 Hello, I must be coming?
Posted by Matthew Coniam 10 comments: 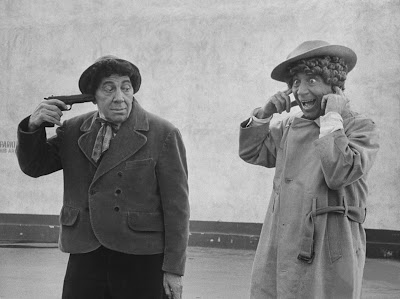 Strangest darned pictures of the elderly Chico and Harpo I've ever seen...
But I can't stop looking at 'em. I love the way that drill bit seems to warp and bend, because they haven't lined themselves up properly. 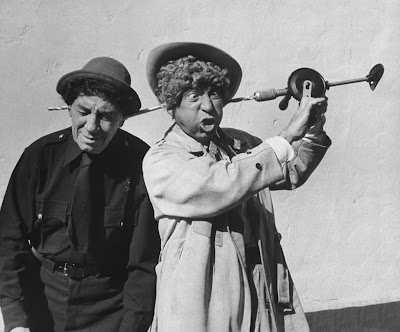 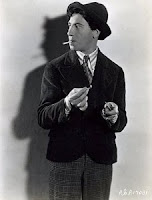 We received the following enquiry today from a new correspondent:

The other day my parents said there's an advert for honey being shown at the moment that Chico Marx is in! Whether it's done from archive footage or a lookalike (it's a tough break for both of them!) I don't know, but I had a look on youtube and googled it but I have no idea what they're going on about! Does anybody know, or are my mother and father slowly going crazy in their old age? Thank you!

My first instinct was to relegate this to the looney file, but then I suddenly remembered that it just so happened I was passing by a television the other day when I heard Chico and Harpo's Big Store piano duet being used as the background to an advert.
I didn't know what it was being used to sell, but turns out it was Rowse's honey.
So your parents were right, but sadly, no visual representation of the great man is involved.

Then around the same time, Damian, who had earlier remarked on the obsession with nuts and nut-related tie-ins and promotions in Marx Brothers pressbooks, sent me this: 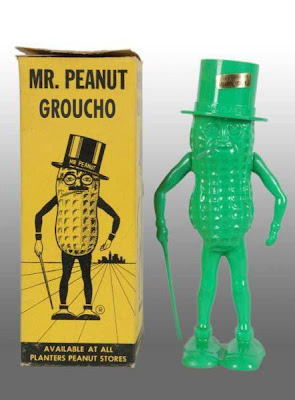 It is, and I quote, "what could have been if a Planters/Marx endorsement had been signed".
I've known this fellow for over a decade, and only now do I discover that he's been keeping his own blog for the best part of two years. Take a look here, and tell him Groucho sent you.
Posted by Matthew Coniam 16 comments:

Gems from the “Night at the Opera” Pressbook!

Look closely at this man on the left.
Think he's Groucho Marx? Well think again.
It's actually an usher made up like Groucho - just one of a thousand socko and surefire ways MGM have come up with to make you want to see their latest comedy release A Night at the Opera, starring this crazy bunch of goofs the Marx Brothers.
Pressbooks are always weird; their ballyhoo suggestions always peculiar in the extreme. But there's something especially revealing about these, since Opera was, after all, a prestige release from the ritziest studio on the block.
Given Thalberg's unease over the team's reputation for undisciplined zaniness, you might have thought they'd play down the madcap stuff and concentrate a little more on the production values, but these campaigns are, if anything, sillier than the Paramount ones.
The thanks for sending them my way go out to Damian, a Council regular (he's the man who solved the Abe Kabibble mystery). In his accompanying dispatch he notes the relentlessness with which the Brothers were associated with nuts, taken to extreme lengths here with a huge variety of peanut endorsement tie-ins and related nut-based tomfoolery.
It prompts the wider point that, while the Marx Brothers were regarded by their adherents as an oasis of comic sophistication in a roughhouse desert of pratfalls, they were always marketed as the most lowbrow comics imaginable, as a bunch of nuts, Tourette zanies almost to be pitied as much as enjoyed. An odd disjunction.
Anyway, time to let MGM work their magic.
Think you don't especially want to watch A Night at the Opera at the moment? You will after the hidden persuaders have gone to work on you with this lot:

MGM display the personal touch. Who, me? 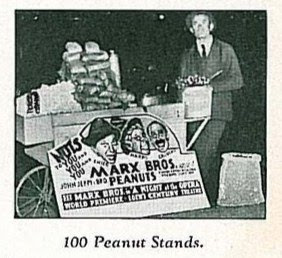 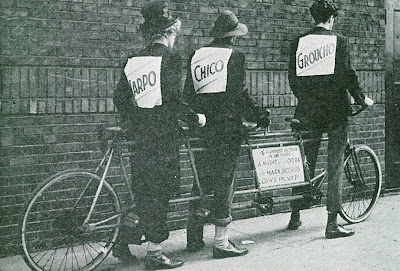 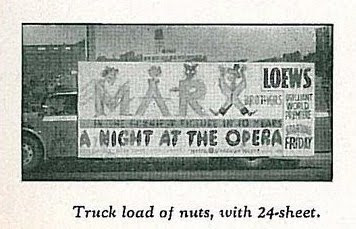 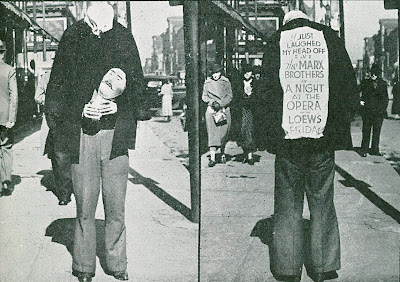 We've all heard the expression 'to laugh one's head off', but it takes the comic imagination of the MGM publicity department to see its true potential. Here we see a man distracting passers-by with a big coat and a small porcelain head. 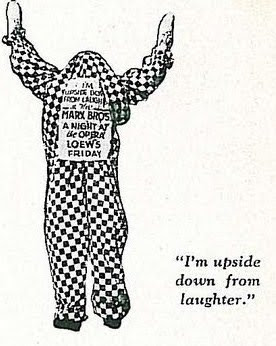 Here they actually invent their own well-known expression out of thin air before converting it into comic promotional gold. But is it just me or does this person look like he's upside down in absolutely no way, shape or form? 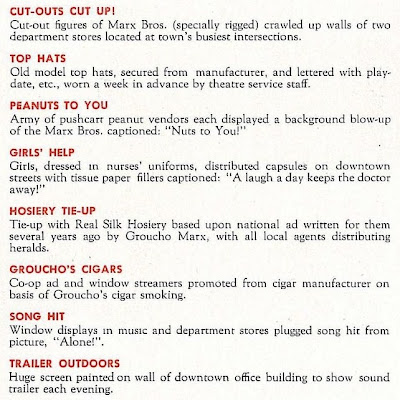 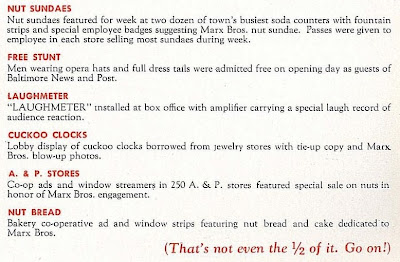 More nut-related promotions, and a cuckoo clock one for variety. Because the Marx Brothers are cuckoo themselves, see? (No wonder Bernard Shaw and T.S. Eliot loved them so much.)

You loved them in Duck Soup! 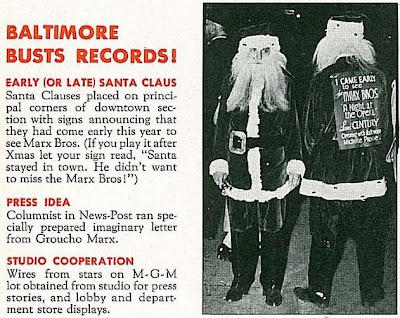 Boy, that guy looks pleased to be there! MGM take no chances with their early or late Santa promotion. What's the betting they had a third sign made for Christmas Day screenings: "I came at exactly the right time to see A Night at the Opera"?
And what about that 'Press Idea'? Genius. 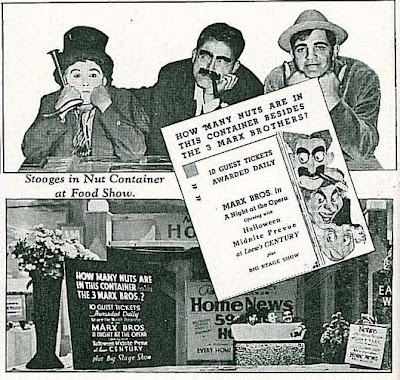 Michael Myers, the killer from the Halloween movies, stands in for Harpo at this Loew's Halloween midnight prevue event. The promotion presumably trades on the fact that the Marx Brothers are themselves nuts.

The only man who took up that 'want ad' offer was disqualified for laughing at the bit where Lasparri beats the crap out of Harpo. 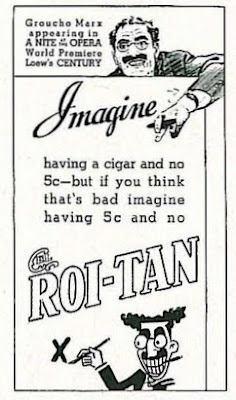 A cigar ad. You can work out the connection for yourselves. 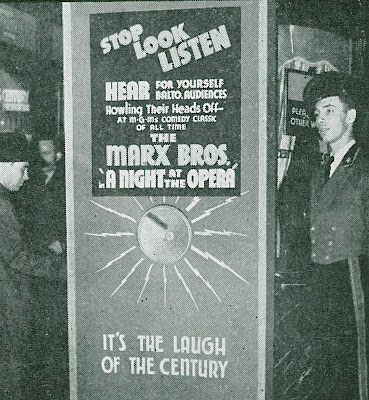 This idea was later revived for Go West, but by then it was: 'Hear for yourself Baltimore audiences chuckling every so often, a man at the back coughing, and the occasional sound of people heading for the exit'.

Or if you're really desperate: