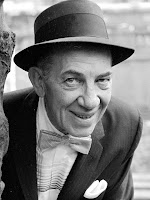 We've had a few intriguing communications in recent months from Bob Gassel, who I must assume, until I receive evidence to the contrary, is the same Bob Gassel who worked on the Jerry Springer Show and a programme called Lesbian Mom.
(Update: He was that Springer guy, and still is, but now he's also our pal Bob.)

A while back, he wrote to ask the following of you all:

The other day I attended my first Macy's Thanksgiving Parade and had a great time. I later looked online at the history of the big balloons and found a listing of when each was introduced. Suddenly I came across "1935: The Marx Brothers (without Zeppo)"!
Really? WTF! How could I have never heard of this? Does a picture or film exist anywhere? HELP!!!!

Unfortunately I forgot to post it at the time, but anyone got any thoughts?
Even more interesting was the following throwaway remark in a recent comment:

There's one quick shot in the Animal Crackers finale where Chico has his hat on backwards and over his eyes...it must be from a totally different take, or is possibly not even Chico at all...

This is a matter that has been raised round here in the past, but for some reason I forgot to look into it further. Anyway, Bob has very kindly provided us with a couple of screen grabs. He writes:

It's only a couple of seconds long and the rest of the time Chico's hat is on normal…and while I'm pretty sure it's still Chico, he sure looks different. 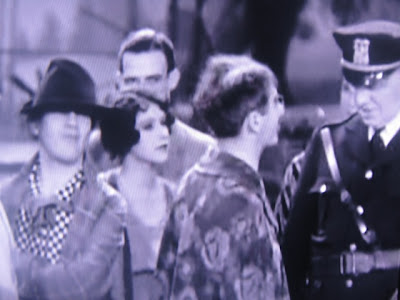 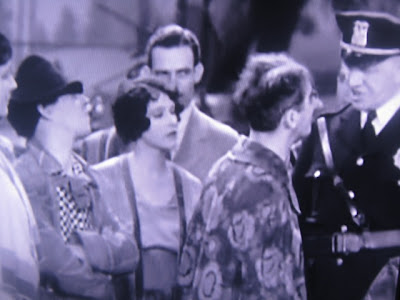 I agree with Bob that it is Chico, but why he's doing it, and why only in one shot I can't imagine.
Presumably he was in that quixotic mood that occasionally came over him, like when he pulls that face singing 'Freedonia, oh dont'ya cry for me."

But what do you think?
And thanks for joining our happy band, Mr Gassel!
Posted by Matthew Coniam 12 comments: 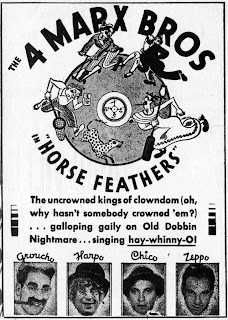 Our pal LAGuy, who blogs over at Pajama Guy, PajamaGuys and the vaguely superfluous Pajama-Guy got to go and see a double-bill of Horse Feathers and Animal Crackers over the Christmas break, while the rest of us were stuck indoors.
He has kindly sent us this report:

For several years now the Aero Theatre in Santa Monica has shown a Marx Brothers double feature on New Year's Day.
Last year it was A Day At The Races and A Night At The Opera, which I discussed on this blog in the comments section of the Opera annotation. This year they showed Horse Feathers and Animal Crackers. (Do they ever show any films after the first seven?)
Bill Marx, son of Harpo (who was signing his book Son Of Harpo Speaks in the lobby) introduced the film. Last year it was Andy Marx. Bill said there's nothing like seeing a Marx Brothers film in a packed theatre (and the Aero was packed). The Paramounts are his favorites.
Anyway, I won't go over the countless comic delights of the two films, since I'm sure readers are aware of them. (If not, see the movies, don't bother to learn them from me.) So I just have a few comments about other things I noticed.

I love almost everything about Horse Feathers, even the little moments, like Groucho skipping away as he reprises "I'm Against It."
I know it's silly to worry about a plot in their Parmount films, but boy do they drop the whole bootlegger thing fast.
I wasn't looking closely, but as far as I could tell, the street where Harpo causes a traffic jam has a cafe, a sweet shop and two cigar stores.
I think British people know this, but just in case, when Groucho says of his son that he's only a shell of his former self "which nobody can deny," he's quoting the last line of the American version of "For He's A Jolly Good Fellow."
The radio says Huxley is taking a lacing, so I'm always surprised when Chico and Harpo get there that the team is only losing 12-0. I'm also disappointed when Chico announces they're going through the middle and instead they sweep left--up till this point, Chico has been quite accurate.

As for Animal Crackers, I wonder how many people would have guessed in 1930 that Groucho's parody of Strange Interlude would become far better known than Strange Interlude itself? (Maybe the Theatre Guild wasn't so lucky after all.)
It's interesting how Lillian Roth exclaims "isn't it romantic" in introducing her song. You almost expect her to sing "Isn't It Romantic?" except that song hadn't been written yet - it would be in two years for another Paramount production.
Why is Harpo's picture of a horse torn in the corner? Couldn't the Paramount prop department get him another?
I was watching Lillian Roth to see how she reacts to Groucho's "Then it's murder" line, since this is the one she kept cracking up on. She smiles and shakes her head. I wonder how many takes were necessary.
Mrs. Rittenhouse owns some pretty modernistic chairs in the scene where Chico and Groucho plan to build a house.
Someone had to scratch a bunch of frames so when Harpo is loading his sprayer you can't see the brand name (which I'm guessing is Flit)? [Sure is! See Annotated Guide - MC]
Harpo dropping silverware is a classic routine, of course, but it must have been far more effective on stage where the audience knew it was happening right before their eyes with no trickery. [And without those destructive cuts creating the false impression that they are stopping to refill his sleeve between shots! - MC]

Watching the two movies one after another couldn't help but remind you of certain similarities:

--Groucho does the leg swinging dance move in both

--both have the tune "Collegiate" (the Professor's theme and Chico's solo)

--when Harpo's coat is removed, there's not much underneath
Posted by Matthew Coniam 8 comments: