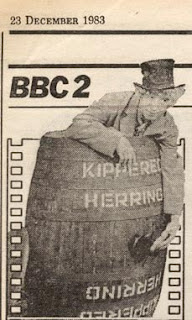 Okay. I already wrote here about how my first encounter with the Marx Brothers was at Christmastime back in the dim distant prehistory of what, with pre-Orwellian irony, I still like to think of as 1983.
.
I also mentioned, sort of casually, kind of half-jokingly - the way I do when I'm being deadly serious and fanatical - that I try to recreate that exact experience by rewatching the same films on the same nights at the same times.
And this year will be no exception.
But this time there's a big difference. I'm running a blog with 28 followers.
So I hereby invite you all to partake of the great annual Tonight We're Gonna Party Like It's 1983 Basically Futile Watching Specific Marx Brothers Films At Specific Dates and Times Challenge.
. .
You may think it's a near-alarmingly pointless thing for a man like me to still be doing at my age. If so, think how much more idiotic it would be if you did it too! Without even the pathetic, skeletal pretence of justification that animates my poor tortured brain. I don't have much of an excuse, but you'll have none at all. So come join me! Let me know how you got on, what it was like and what kind of transcendent state you reached. Send me photos of yourself with the film clearly visible on a tv screen, holding a watch to confirm the time and the newspaper to confirm the day. We can do this!
In my case, the situation is made even more complicated by the fact that the following year BBC2 introduced me to another passion: Hammer Horror films. And needless to say, I try to do exactly the same thing with those. I detail this challenge over here, on my horror movie blog Carfax Abbey. Where there are clashes, I'll let you know how to get around it, should you wish to compound the absurdity of even contemplating actually doing this by contemplating doing both.
So get your diaries out; here come the dates. Cancel that party! Forget that Gordon Ramsay's Christmas Celebrity Foxhunting on Ice Special you were planning to watch instead.
Imagine by contrast the warm fraternal glow, imagine how - in the profoundest, most Dickensian sense - Christmassy it will feel, to be part of an esoteric community, all over the world (well, Britain and America, and one in France, oh - and an Australian), all linked in this one common aim. If any one of you actually does this, even with just one of the films, or even is still reading this now, as opposed to having given up somewhere back when I started going on about taking photos of yourself holding a newspaper, I will be both profoundly delighted and frankly surprised.
.
23rd December, 10:30 pm: Monkey Business
. 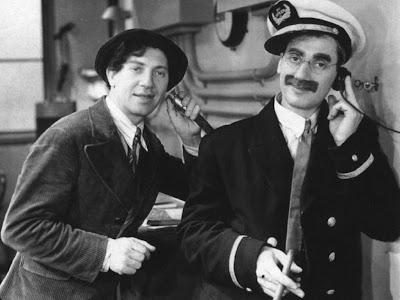 This was the one. I actually came in late for this one, somewhere around the Chevalier impressions. I'd seen the trailer for them all several times but was only mildly curious, had been out to some family party or other, and switched on casually when I got back home - only to encounter the funniest men of all time being funnier than anybody has ever been in the history of people being funny.
You can, if you wish, recreate the exact experience by starting your recording at 10.30 but leaving the television switched off until about five past eleven. Sometimes I like to do that; other times I just watch from the start. I say this to assure you that I'm not some kind of fanatic.
.
Christmas Day, 11pm: Duck Soup
. 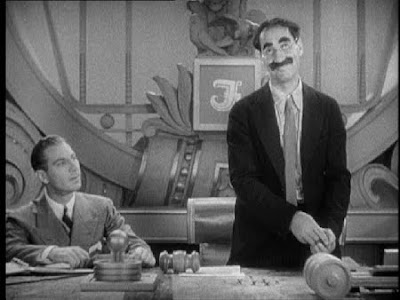 Now, this is the curious one. My memory tells me that after cursing my ill-judgement and coming in late on Monkey Business I made sure I didn't miss a second of any of the rest. And yet, I have no specific memory of this first viewing of Duck Soup. I remember other things about that night: like, for instance the fact that my mother wanted to watch the All Creatures Great and Small special on BBC1 while my grandfather wanted to see Jimmy Tarbuck on ITV. But of watching Duck Soup later that night I recall nothing. Further, one of my clearest memories of Horse Feathers was of being surprised when Groucho begins singing at the start, and not realising that they did this. Perhaps I again missed the beginning? Or perhaps I really did miss the whole film? I just don't know. However, for this reason, it is permissible to watch it at 12.20 am on New Year's Day, when BBC1 showed it in 1984. I know I didn't miss it then. It's okay if you want to stretch the rules a little and do this. I won't mind. Too much. `
.
28th December, 11.15 pm: Horse Feathers
. 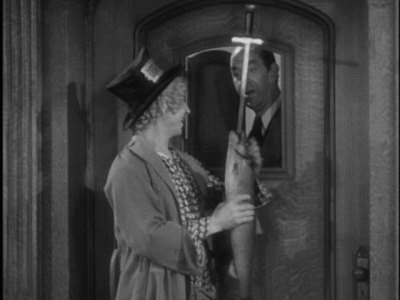 Here, perhaps, was the moment that a temporary fixation became a lifelong obsession. I just didn't know that anything could be this funny. And my father began watching them with me at this point. He likes to pretend he doesn't much care for them now, but the truth is we were weeping with laughter. When Harpo cuts the cards he rolled off the sofa on to the floor.
The bad news is that this clashes with a Hammer Horror double-bill over at Carfax Abbey. But I didn't actually watch those 'live' as it were. We got a video recorder in 1984, so I had the luxury of watching them the following morning. Feel free to do the same.
.
29th December, 10.50 pm: A Night in Casablanca
. 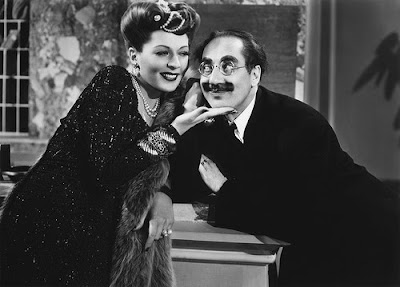 The BBC decided to test me by throwing in a late non-Paramount and see if I'd spot the difference. I did, but I couldn't quite place why. I remember my dad saying that it wasn't quite as good this time, and I think we both concluded that they were just not at their best the day they made this one. The truth is that the film is really pretty damned good to compare so favourably with the early-thirties faultless masterpieces. Not many of the MGMs would have stood up so well in such company. For that reason I've always had a soft spot for this film.
Hammer fans will note a thirty minute overlap between this and the 1984 showing of The Mummy, which began at 11.45 pm. Fortunately, however, I missed the first half hour of The Mummy, not by pretending to watch A Night In Casablanca instead, but because my sister wanted to record a programme about Duran Duran on ITV. So again, history solves a dilemma with almost eerie precision.
.
30th December, 11.55 pm: Animal Crackers
. 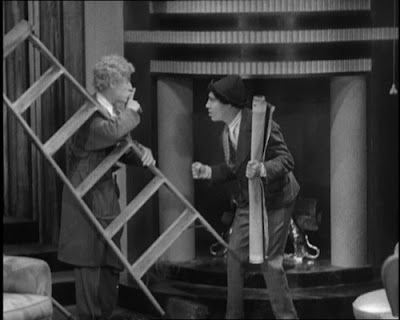 The last, and still, for me, the best. I realised by this time that I could not bear to say goodbye to these boys. So, placing a curse on all my friends with video recorders - I basically spent the whole of 1982, 3 and the first half of 1984 fantasising about video recorders; I still love handling those tapes - I rigged up my little portable cassette recorder and taped the soundtrack. No direct linking cables or anything, just a tiny little mic inset in the machine, capturing the full gamut of household sounds along with the movie. So many times did I play it over the following years (until we finally got a Betamax video and I made the film one of my first purchases) that I still find myself mildly surprised that a door doesn't slam when Harpo makes his first entrance.
.
So there we are. All you need for the merriest Christmas ever. You may do more important things this year. But it's unlikely you'll get a chance to expend energy achieving anything quite so senseless.
Let's go!
And we'll be back in the new year with an annotated Duck Soup, that long-promised discussion of the Marx Brothers' films and the rise of European fascism, and lots more!
Thanks for making this first year of the Council such fun.
Merry Christmas,
Matthew.
Posted by Matthew Coniam 11 comments: