Say, Herbert... That you in the dark? 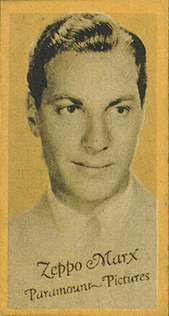 Original council member Eugene Conniff has opened a whole new can of worms on the matter of the Marx Brothers Doppelganger Conspiracy, the scene in Animal Crackers in which Groucho, Chico and Harpo are represented by doubles (see here).
He's drawn my attention to this bit of speculative Youtubery, in which it is suggested that the fake Groucho is in fact none other than Zeppo, whose legit appearances in the film are so few in number and brief in duration that they amount to little more than a cameo.
If you look at the brightness-enhanced clip, it is true that in certain shots he does look very much like Herbie Marx.
.
But then, you always have to be careful on these occasions that you're not simply seeing what you want to see.
To test that hypothesis, I watched it again, this time pretending that I was convinced it was Claudette Colbert. Ironically, I now remain convinced that it is.
Truth is, yes it looks like Zeppo in some shots, and in others it doesn't. What we're seeing here, I think, is a mingling of the now increasingly widely accepted fact that it isn't Groucho, with the old story of Zeppo substituting for him once and nobody noticing - a story which may well be apocryphal but which ostensibly took place on stage and pre-dates this film by many moons.
The Youtube posters certainly reveal something of the perils of wishful thinking when they go on to speculate that Zeppo can be discerned impersonating Groucho's voice, when one of the most obvious giveaways that it is a double in the first place is the imprecise manner in which he is miming to a soundtrack - the voice is unquestionably Groucho's own.
In addition, it is not merely Groucho but all three present brothers being doubled: if it is merely Zeppo doing Groucho as an in-joke, why the third-rate Chico and Harpo stand-ins?
Sorry, but I'm not buying this one.
.
But while we're here, let's stroll down oddity cul-de-sac with some more great Zeppo moments... 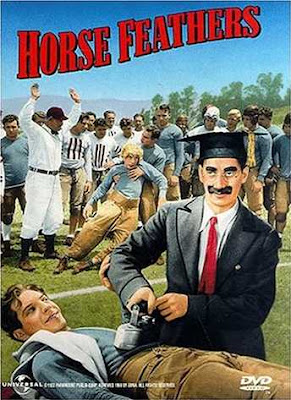 For ages - until after I first posted it if I'm honest - I thought this image of Groucho ironing Zeppo during the football match in Horse Feathers was merely the deranged, drug-fuelled fantasy of the artist that drew this DVD sleeve. But no - the scene really existed, as shown below. Still an inexplicable choice for the DVD cover image, though.
. 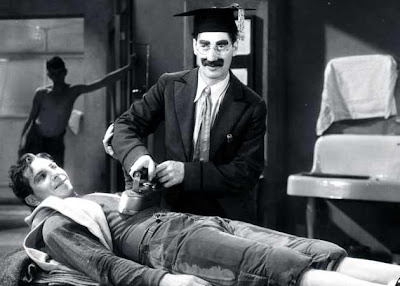 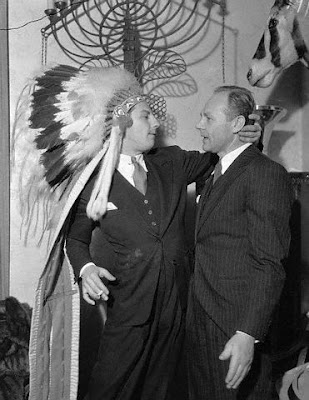 Zeppo's impersonation of a Red Indian putting the move on what would appear to be Charlie Ruggles
. 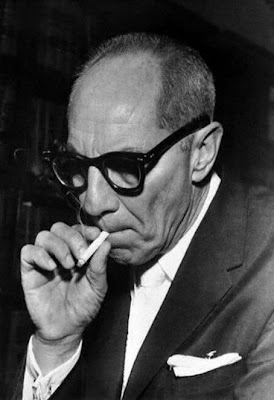