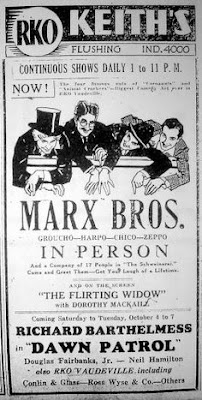 Thanks to Damian, partly for designing our spiffy new header, and also for hitting upon this charming ad for one of the mini-touring shows incorporating bits of other shows that the Brothers used to do between proper shows.
The heading identifies them as the stars of The Cocoanuts and Animal Crackers - that, and the films listed beneath, safely dates this as 1930.
In tiny type that defies you to read it, we learn that they are appearing in person with a 17 strong cast in The Schweinerei. Schweinerei, Damian assures me, is defined in the wictionary as
mess, nastiness, smutty business, (lit:) piggishness.
We are urged to "come and greet them and get your laugh of a lifetime".
It comes from this photostream, dedicated to saving the historic RKO Keith's Theatre. The pictures, of this and other ads plus great shots of the theatre in its heyday and now in heartbreaking disrepair, are well worth a look.
Posted by Matthew Coniam 5 comments:

Email ThisBlogThis!Share to TwitterShare to FacebookShare to Pinterest
Labels: Advertising and Ephemera 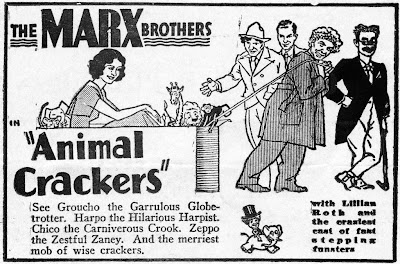 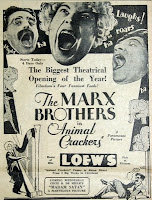 Looks like the jungle animals from this one have been rounded up and put in a box, and they've got Lillian Roth to sit on them so as to make sure they don't escape. (Great to see a bona fide caricature of Lillian, rather than just some woman, as is usually the most you'll get from these artists.)
Harpo is his usual obliging self, opting to pull Lillian and the animals along on a rope, while Chico (the carniverous crook) and Zeppo (the zestful zaney - only slightly less bizarre than a zestful zancy, which is how I read it at first) simply watch from the middle-distance in revolutionary transparent suits and hats. Zeppo, in keeping with his reduced role in the film, has decided to leave his legs at home.
Meanwhile Groucho, true to form, leans on his famous upside-down walking stick.
But what's this? One of the tiny elephants has escaped, and is being merrily ridden from the scene by that pesky miniature Harpo, up to his tricks again.

I don't know about you, but this is a film I want to see.

Anyone know what a faint-stepping funster is, and where I can buy one?
Posted by Matthew Coniam 4 comments: