A Tale of Two Susans 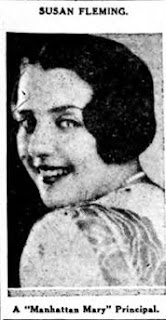 Harpo's blissful marriage to former actress Susan Fleming is the stuff of Marx legend.
But so happy was their union, and so completely did Susan immerse herself in her new life and family, that only the most cursory account of her career before settling down with Harpo is generally known.
Harpo's autobiography paints a somewhat misleading account of her life before they met, portraying her as a girl from a small town who tried her hand at movies and didn't much care for it:

Her father was a fine draftsman and amateur artist. Susan had inherited his talent, and the most fun she had as a kid came from drawing, and watching her father work with pen and brush. Those were lonely years for a girl as full of pizazz as Susan. When she got older, art didn't seem satisfying enough and she turned to acting. "Now," she said one afternoon, "I'm not sure an acting career, or any career, is the answer..."

In reality there was much more to it than that. That she was a Ziegfeld Follies girl is of course no secret, but there is more still to be discovered, a history obscured in part accidentally, on account of her alternating two slightly different professional names.

Let's start with Broadway. Those expecting to find her at the IBDB will be disappointed at first to find she is not present at all. But a little perseverance and experimentation will pay off: as 'Suzanne Fleming', she is listed as a performer in Ziegfeld's No Foolin' (1926) and George White's Manhattan Mary (1927). She also appeared, along with Paulette Goddard, in the 1927 season of Rio Rita, and the 'Plays and Players' column of the Brooklyn Daily Eagle in 1929 tells us:

But a chorus girl's popularity is measured as much in portrait shots and column inches as recognised stage credits, and the record would seem to suggest that Susan was among those earmarked for special promotional treatment. 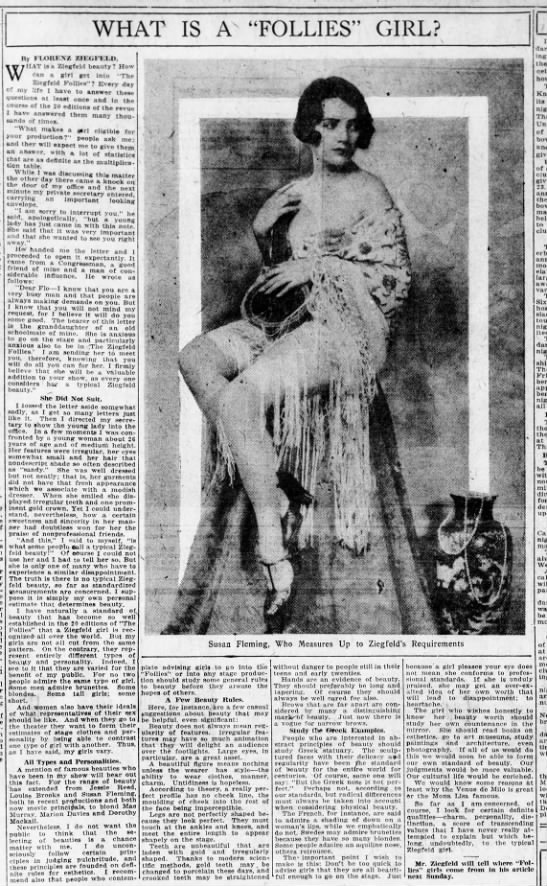 What makes the perfect Follies girl? Ziegfeld himself pondered the matter in this 1926 article from the Eagle, and it's Susan ("who measures up to Ziegfeld's requirements") that is chosen to illustrate his conclusions.
Her beauty was much celebrated. The following year, the same paper told us that her fellow players in Manhattan Mary had voted her "the prettiest girl in the show." And this intriguing yarn was recalled as publicity for The Great Ziegfeld in 1936: 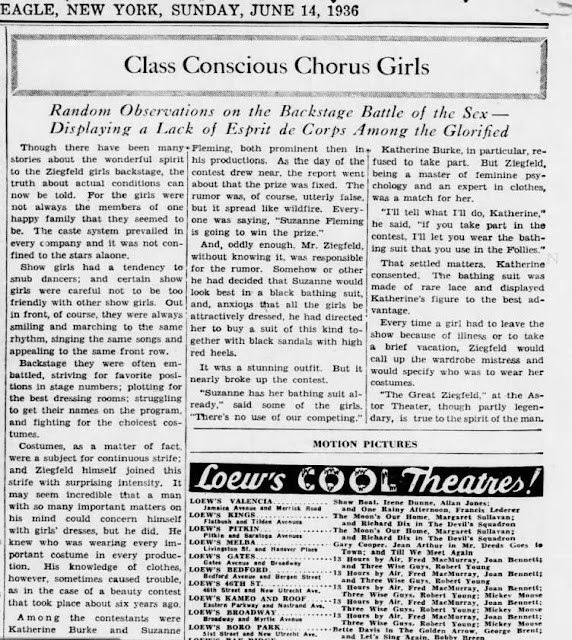 Throughout the 1920s reports she is sometimes referred to as Susan and sometimes as Suzanne. But by the time of such retrospectives as above, this Ziegfeld incarnation has generally come to be known as Suzanne. The tendency to presume that she is therefore not the Susan Fleming of Million Dollar Legs et al started early. In another 1936 retrospective asking 'what has become of the Ziegfeld girls?' we are told this:

Champagne sipped from her slipper, eh? Not quite the Susan Fleming we thought we knew!
But what's that about filming with Menjou? Just an error? Nope - another surprise... 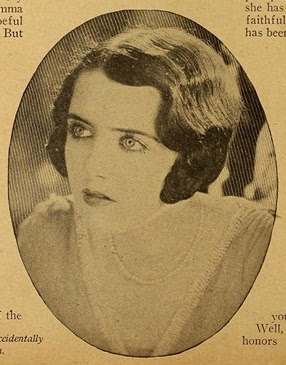 One thing all sources agree upon is that her movie career began in 1931, with her role as Susan the secretary in the Columbia talkie Lover Come Back. From here she joined John Wayne in Arizona and The Range Feud before hightailing it to RKO, Fox and, eventually, Paramount, where she made her most famous film, Million Dollar Legs. This standard account is the one you'll find in the reference books, Wikipedia and on her IMDB page.

But in fact, she had already starred in a Paramount movie in 1926. The source of the confusion can be easily guessed - if not, here's a curious IMDB record for an actress with a strangely familiar name...
This is, of course, our girl, making her movie debut five years earlier than history would have us believe, and in a silent movie entitled The Ace of Cads.

Aside from confusion over the two names, it seems odd that her participation in the film should be forgotten. Indeed, as we shall see, it seems deliberate, albeit for somewhat uncertain reasons.

Here's the plot, for those who are interested, courtesy of the Adelaide Register:

It seems to have been pretty hot stuff - the film was, in fact, banned in Britain. As to Susan's potential as a new screen star, the publicity drum is beaten with obvious investment: 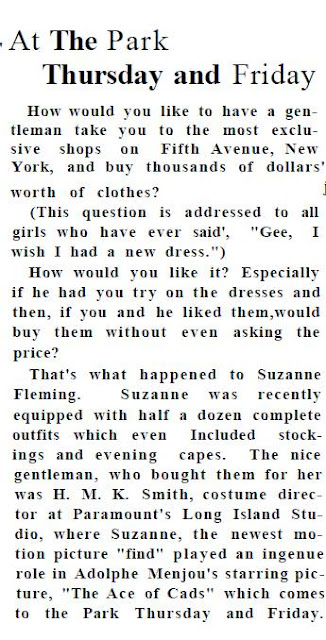 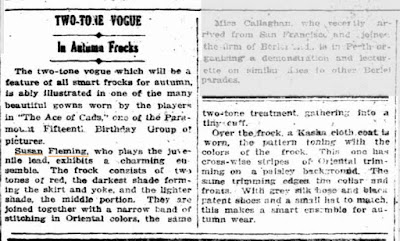 The reports show all the usual signs of special promotional effort. We learn that the newcomer is deemed good enough for a role intended for an established heavy-hitter, and also that the lead selected her personally: 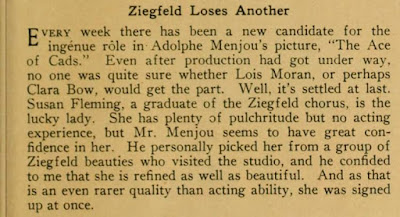 Piece after piece plays on this claim that Menjou was smitten with Susan after fortuitously seeing her posing for a Ben Ali tableau: 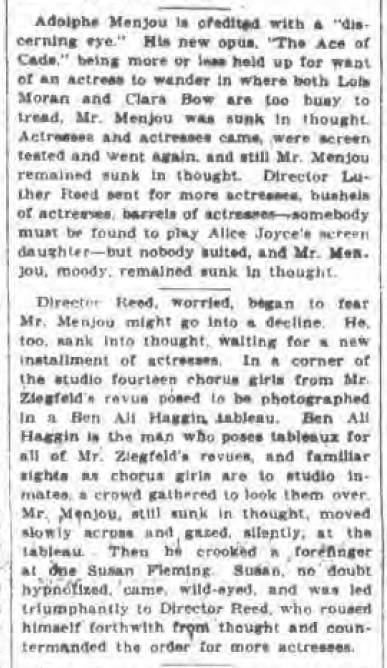 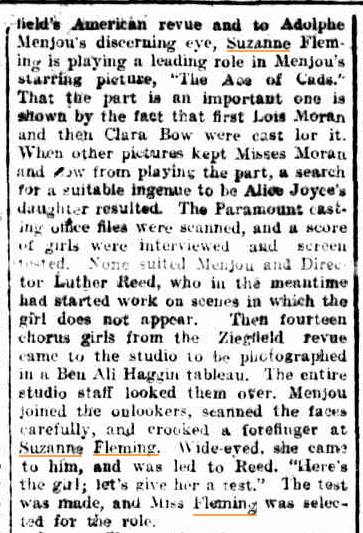 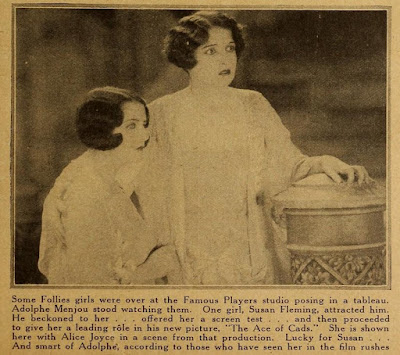 And we are left in no doubt as to the certainty of a long future in movies: 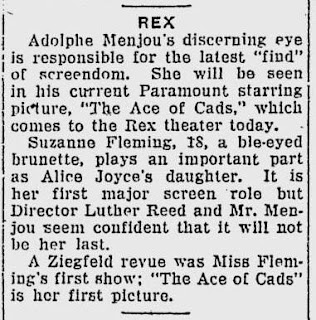 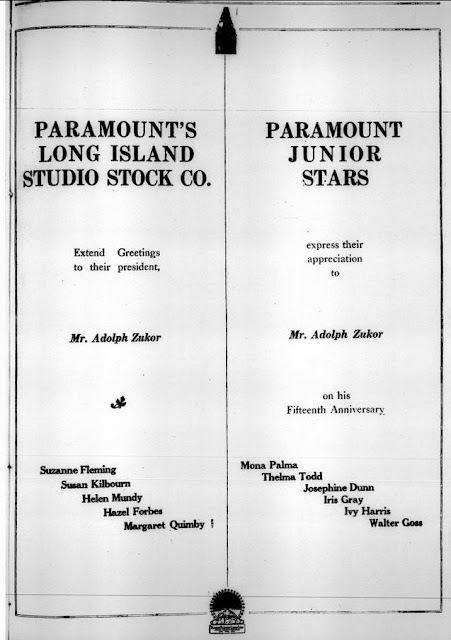 And yet, she drops right out of movies for four years. This may have been as a result of Paramount's decision to close its East Coast studio early in 1927 (reopening it in 1928 to make use of Broadway actors in talkies). Tempted though she may have been by the movies, it would have meant commitment of a very different order to follow opportunity all the way to Hollywood, especially when there was no shortage of glamour, excitement and people willing to drink from her slipper on Broadway.
Or, it could have been for no more pointed a reason than that the film did not meet expectations. 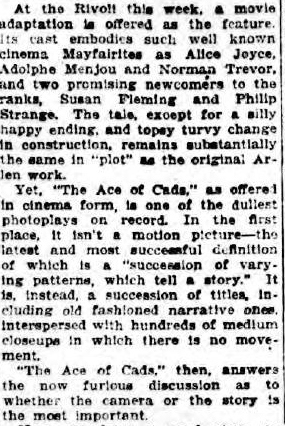 Susan herself escapes the reviews with her dignity intact, but what praise there is is generally faint:

By 1928, Picture Play was answering a reader's enquiry thus: 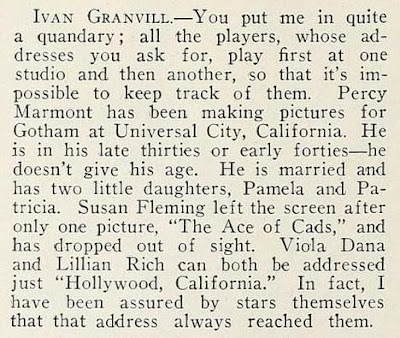 Whether the film was deemed a jinx or not, when she does return in 1931 (the point where the IMDB and everyone else first begins to track her) she is relaunched as a completely new star: no mention whatever is made of her earlier starring debut.

Silver Screen, 1931 (and look who we have discovering her this time!): 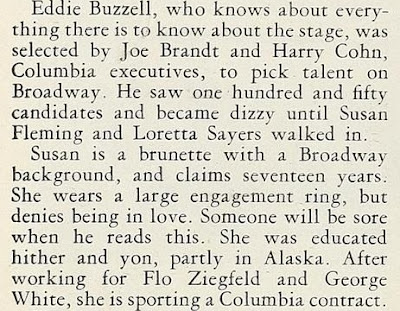 For whatever reason, there seems to have been a definite effort to disassociate this new attraction from the Susan Fleming that was launched so auspiciously just a few years before. And history has proved happy to oblige.
From here, Suzanne disappeared for good, and the all-new Susan Fleming the Second re-entered the gates of Hollywood to make her dates with Klopstokia, Harpo and destiny.
Let's toast them both.

(Thanks to Rodney Tryster, Bob Gassel and Ed Watz for invaluable research)
Posted by Matthew Coniam No comments: