Harpo speaks, sings and sneezes - Your one-stop guide to the silent one's vocal lapses on film 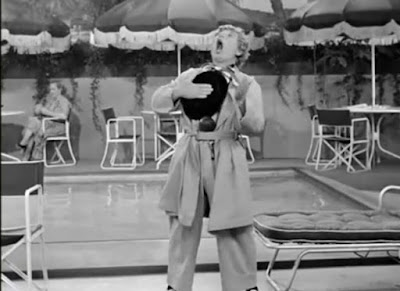 One of the subjects that comes up most often in our Facebook group is the various occasions on which Harpo does, or might, speak on film.
Whether it is an accidentally recorded slip, or a sly in-joke, the number of suggested examples is greater than you might think.

There are also a couple of notable cases outside of the Marx movie canon itself.
In this edition of The Spike Jones Show, the strange hacking laugh at 7:06 certainly appears to be coming from Harpo. He can also be heard indistinctly mumbling to Jones at 24:13:

This in turn, lends greater credence to the suggestion that it may be his laugh we can hear in this moment from You Bet Your Life (at 0:37): the laugh doesn't sound like anything we might expect to float past the Harpo tonsils... but it does sound like the laugh in The Spike Jones Show...

Best and least ambiguously, in this newsreel footage from the premiere of The Great Ziegfeld he says "honk, honk!" into the microphone, and can be heard saying "You gotta do the talking" under his breath:

Harpo certainly knew that his trademark silence was not something to be abandoned lightly, on camera at least. Once revealed it could never be unheard, which is why he tended to limit planned speaking engagements to the stage. We do now know that the original plans for Room Service were to do it as a proper adaptation of the original play, with a real moustache for Groucho, no Italian accent for Chico and a fully vocal Harpo. But the team had second thoughts and abandoned these plans relatively late into pre-production, probably when it became obvious that their surprise re-signing by MGM meant that the opportunities for experimentation that had first lured them to RKO would now be off the long-term table.
Then there's the claim that Harpo was offered a large sum of money, additional to his salary, to shout "Murder!" in A Night in Casablanca. But not only does he not do so, it is massively unlikely the offer was ever really made - most likely it is, like the notion that Warner Brothers threatened legal action over the title and Groucho destroyed their pretensions in an ongoing correspondence, just another publicity scam dreamed up by producer David Loew.

The following examples, however, all appear in the established canon of 13 official Marx Brothers movies.
We shall weigh up the evidence for each in turn, and then let Harpo himself deliver the verdict...

When the four brothers enter in absurd bathing costumes towards the end of the film, four voices can be heard performing this number. Harpo's lips are clearly moving, but for most of the time he seems to be deliberately hiding behind Groucho. This suggests that he is indeed contributing to the sound, as he would surely have done on stage, but not as an in-joke, hence his furtiveness.

Now, of course there is the suggestion of four voices being heard, for the services of the joke. (How do you know there are four stowaways? They were singing Sweet Adeline!) For a long time, however, debate has raged as to whether there really are four voices to be heard or only three. For the longest time I insisted I heard only three: Glenn Mitchell and I fought bloodily and at length over the matter. More recently, however, I have been convinced by Andrea Orlando, whose graphic below, when followed with the soundtrack running, conclusively reveals the presence of the elusive fourth voice: 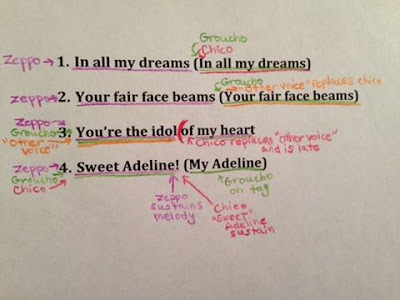 Of course there is no sure certain way of proving that the other voice is Harpo's, but on the other hand there are no sensible grounds for supposing it isn't. (What's more, there seems to be a degree of in-jokey concealment here, suggesting the exercise is a deliberate tease.) So I think it is reasonable to reach a firm conclusion on this one. Over to Harpo...


3. Geeing-up the horse in Horse Feathers

When Pinky first gets in the dust cart and rides away to the big football game, he can clearly be heard signalling to the horse to move off. The only question mark is over whether it is Harpo at all: the face is indistinct, and the action - though not exactly hazardous - is nonetheless something one would expect a stunt double to perform. On the other hand, in the following shot of the horse charging down the street, it does appear to be the real Harpo. Therefore...

4. Saying "In the opera" to Chico in A Night at the Opera

Andrea Orlando again, and this one's a real find. When Harpo and Chico first meet at the beginning of the film, Chico asks Harpo, "Where's Riccardo?" Turn it up good and loud: he unquestionably whispers something in reply, and it's almost certainly "in the opera". Now this is interesting: he's not giving Chico any kind of a prompt, so there's no reason why he should say anything. Yet it's not done like an in-joke. I think I like Andrea's suggestion, that it reveals that Harpo has a kind of spoken script in his head at all times, and is "emoting under the constraints of not being able to speak yet knowing exactly what he wants to say." And this time, the words slipped out.
Whatever the explanation, of the fact of the matter there can be no doubt:

5. Playing comb and paper in A Night at the Opera

This is one that passes a lot of people by. Obviously there is no question that he is playing the comb and paper in the scene where he and Chico are locked in the brig. But does that require a voice? Try getting a tune out of one using only breath and you'll soon find out!

6. Singing 'Down by the Old Mill Stream' in A Day at the Races

Another one that should have leaped out of the screen at me, but which I didn't even notice until it was pointed out to me by my pal Jay Brennan. The Brothers' rendition of this number - behind face masks - during Dumont's medical examination, is clearly being delivered by three voices. As with Sweet Adeline we can't prove it's Harpo, but it seems a stretch and a half to propose it's someone else...

This is a slightly sneaky one, in that it's never been claimed this appears in any release print. Nonetheless, according to a contemporary report in the Evening Independent "rushes prove conclusively" that in one take of the turkey scene "Harpo forgot himself" and yelled 'Stop that bird!'
Obviously impossible to prove one way or another, but these kinds of desperate publicity stories are legion, and there are no grounds for taking it seriously at all. Be firm on this one, Harpo...

8. Doubling for Chico in At the Circus

The Milwaukee Journal of July 22, 1939 claimed that in the rain scene where Chico allows thingy and whatsit onto the train, it is actually Harpo mischievously standing in for him, dialogue and all. This was a prank of which even director Ed Buzzell was unaware until afterwards, it goes on to add, but he concluded: “If the director couldn’t tell the difference, how can anyone else?” Well, who knows - maybe that is him, shot from a distance? But the dialogue is surely overdubbed, and I don’t care how well they could impersonate each other: that’s Chico’s voice. Meanwhile, the Brooklyn Daily Eagle (July 11, 1939) goes further, claiming that “for a gag in one scene” Harpo and Chico both exchange roles, and says that the Marx Brothers “defy the audience to pick the place where it happens.” Yeah, whatever.


9. Sneezing in At the Circus

Harpo's character in this film - I forget his name; probably Woofles or something - delivers several raucous "Atchoo!"s in the scene where Groucho and Chico are interrogating the midget. But the sound is overdubbed, and the likelihood of it being Harpo's actual voice is very slim. Still it can't be ruled out entirely, and so, though it's massively unlikely...

And that's your lot. Unless any of you know better, that would seem to be as close as you'll ever get to actually seeing Harpo talk on screen - outside of those home movies, of course...
Posted by Matthew Coniam 29 comments: