Did they always come out of a barrel? - The Marx Brothers and the Immigrant Experience 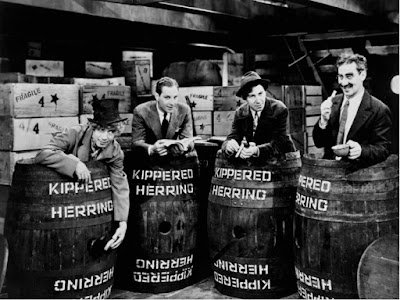 We were recently talking in our Facebook group, as we often do, about the extent to which we are entitled to view the Marx Brothers films as social commentary.
Specifically, on this occasion, the topic was whether or not Monkey Business can be viewed as any kind of a commentary on the immigrant experience in America. It's a complex question, with good arguments on both sides, and neither position can be said to have a lock on it. But my feeling is that it can’t, really, and not for the reason usually given – that such considerations are to be avoided because they a priori risk sucking the joy out of the films – but because I genuinely don’t believe that committee-devised entertainment films of this sort ever worked that way.
While they of course can (and to some degree must) be reflective of the society in which they are created, that is not the same thing as possessing a conscious level of engagement with any of its wider issues. It seems to me that for that you need a single presiding creative imagination, and I would certainly argue that the opening scenes of Chaplin’s The Immigrant, for example, most definitely do qualify as social commentary, in a way that Monkey Business, I feel fairly sure, does not.

Nonetheless, it prompted the following train of thought, which touches on the slightly wider question of how far we are entitled to view the Marx Brothers' screen personae as reflective of their own selves, backgrounds, and histories. And here I most definitely am not asking if they were as crrrrazy in real life as they appeared on screen, and hey, what about that time they nailed Thalberg to a tree and set light to his eyebrows, or anything like that. But purely and simply, are the Marx Brothers – by which I mean those characters we see on the screen – always immigrants?
Well, Chico, at least, most obviously is - or appears to be, which is only to say that he is adhering to the terms of a comic archetype. That much could be entirely irrelevant to the fabric of the films themselves, not least because it so massively predates them. But more deeply, can we see in their interrelationships and hierarchies anything directly reflective of the immigrant experience?

In our last podcast, co-host Bob Gassel made the very important point that Monkey Business differs from the other four Paramount films in two highly significant ways. First, it is the only Marx movie in which we meet all four Brothers, already fully bonded, at the same time. And second, it is the only one in which Groucho has no position of authority or superiority, either in relation to the brothers or the world in which they move.
And of course the reason for that is explicitly given in the very premise of the film: it's because they are immigrants, newly arrived, stowing away on a ship without passports. But in a way, the question really being begged here is not why this one film is different, but why the other four are the same. Why should films detailing the exploits of essentially absurd, impossible comic characters, in settings as widely divergent as a hotel, a society party, an American college and a mythical country, maintain exactly the same relationship and hierarchical structure between the characters, and, as a unit, between the characters and their wider context?
Now, obviously, this is in large measure because they are adhering to an established formula, but nonetheless, formulae have to come from somewhere. True, we should never forget that the Marx Brothers had a long, linear and incrementally developing career. But I think we can still fairly argue that the essential formulation we see in the early movies originates with George Kaufman and The Cocoanuts. It was Kaufman who was given the task of taking revue comedians and putting them into a coherent narrative, which inevitably means establishing concrete relationships and backgrounds for them, even if they remain unspecified in the work itself. And I think it is reasonable to propose that in so doing he would be influenced by the actual men he observed behind the greasepaint, and their histories, and, especially, what constitutes the outsider status that is their single most important defining comic element.

Imagine, therefore, that in The Cocoanuts and (by virtue of the conventions it establishes) in all the Paramount films, the Marx Brothers are immigrants. The difference is that Groucho, very much unlike the Groucho we see just once in Monkey Business, is not newly arrived. He’s already arrived, and he's already used his wit and his wiles, and his chutzpah, and his enormous capacity to manipulate language and manipulate people, to get somewhere. Now, once the formula is established, that somewhere can be as absurd as you like – it could even be the president of a college, or the president of a country. But going back to the original formulation, in The Cocoanuts, he’s managing a hotel, which seems like a pretty reasonable level of attainment, even in a straight comedy or drama.
Then, Harpo and Chico arrive. But unlike Groucho, they’re fresh out of the barrels, and looking for the loopholes and opportunities he’s already spotted and seized. Inevitably, they instantly recognise each other – not who they are but what they are – and that is why they instantly bond, team, and make mischief together, as if they had known each other all their lives.
At the same time, however, it is why Groucho, who has achieved a position, however fraudulently, that he wants to guard, retains a slight sense of superiority, of distance, and of difference (and even, in the duologues with Chico, of frustration and resentment) – because they remind him of what he has left behind, and he represents to them the goals upon which they are focused. (There's his argument: restrict immigration) In that sense Chico is as parasitic of Groucho as all the Brothers are of the wider society – and Groucho knows it.

There is one unique supporting character in these movies – Roscoe W. Chandler, played by Louis Sorin. He is a straight man, a blustering foil, but one who is given unique license to interact with Groucho in semi-comic ways. Everybody loves this character, and this performance, even more than the Sig Rumann heavies, because he’s multi-dimensional. But in what way is he multi-dimensional? Clearly, because he too is an immigrant, but unlike Groucho, he has got on not by exploiting the customs of the host nation but by capitulating to them, and in so doing by suppressing his true self. So they goad him not because he has achieved success – they want to do that, too – but because he has sold his soul for it.
To see what Chandler might just as easily have been, watch Sorin’s performance in the film Glorifying the American Girl. Here he takes a comic role, in a sketch with Eddie Cantor, as a Jewish tailor fleecing a customer. He's very funny, and very Grouchoesque. In that sense, both the greatness and the tragedy of Roscoe Chandler as a character is not just that he’s a fine straightman, but that he is a potential Marx Brother, deep in denial.

I've very consciously not mentioned Zeppo in the above discussion. Finally then, if one wishes to stretch this account as far as it’s possible to go, there is a case to be made that uniquely among the Brothers, Zeppo’s character is not an immigrant. I have noted in the past that there is no way Zeppo as a character would ever be admitted into the Marx gang in the way he is in the movies, unless it is for some very explicit reason that the writers, tellingly, always take care to give us. Usually he is an employee of Groucho, and as such there's no reason to suppose he is anything other than he appears: a good looking, clean cut, well-dressed young American man on the up. He's certainly no outsider. (In fact, this all-American persona is the same one he projects even in Monkey Business, opening up the possibility that he may not be an immigrant even there, merely someone who - for any number of possible reasons - is obliged to travel without a passport.)
The odd film out, of course, is Horse Feathers, where a blood relationship with Groucho is explicitly stated. But recall that line: "I married your mother because I wanted children..."  It could be extrapolated from that that Zeppo was born in America, and that Groucho, as part of his campaign of advancement, married into a non-immigrant family with the explicit aim of establishing a non-immigrant bloodline. And no wonder, therefore, the tag “Imagine my disappoint when you came along!" Because what he in fact sired – visually at least – is not Clark Gable, but another Marx Brother.
And note, too, that in Monkey Business, the only film in which we know for sure that Zeppo might be an immigrant - it is he who ends the film looking to be set on the course of social advancement, with his feet poised to land beneath the table of a wealthy, non-immigrant American family. Far from Freedonia or Huxley College, Groucho ends the movie with Chico and Harpo, still attacking reason in an old barn.
Posted by Matthew Coniam

Stimulating reading - once again, Matthew! By all means please include these insights in your (eventual) Newly Updated Second Edition of The Annotated Marx Brothers - a book that would be difficult to improve upon but it seems that you are doing it. And so people know it's a second edition, why not keep-a the outside green, but make-a the inside cerise...

To me, "Monkey Business" has to be a social commentary. It represents two of America's origin stories. On the one hand is the idea that America is the New Garden of Eden, a vision promulgated by the Puritans and later their cultural progeny, the Protestants (the Ku Klux Klan and the alt right takes this idea to the extreme). On the other hand is the idea that the United States is direct product of the Enlightenment and the revolutionary notion that "all are created equal." Helton's party at the end of the film represents the American paradise and the brothers, as they do in each of the films made between 1930 and 1937, violate this sacred sphere. The unmistakable statement is that the non-Protestant cannot be kept out of a country founded upon sanctity of the individual.

Why do you assume they are immigrants? There is no evidence for it. Isn’t it equally possible they are US citizens stranded overseas making their way back to USA, especially as they are fairly fluent in English?

Wouldn't they have passports if they were US citizens? Or are you assuming that each of them accidentally lost their passport? That's a lot of quick accidents there for a quiet neighbourhood.

Veikko: That's what I say. The Marxes' act grew out of immigrant humor. To fail to recognize this is to ignore the most potent force in a century of American comedy.

Where did I say that the Marxes' act grew out of immigrant humor?